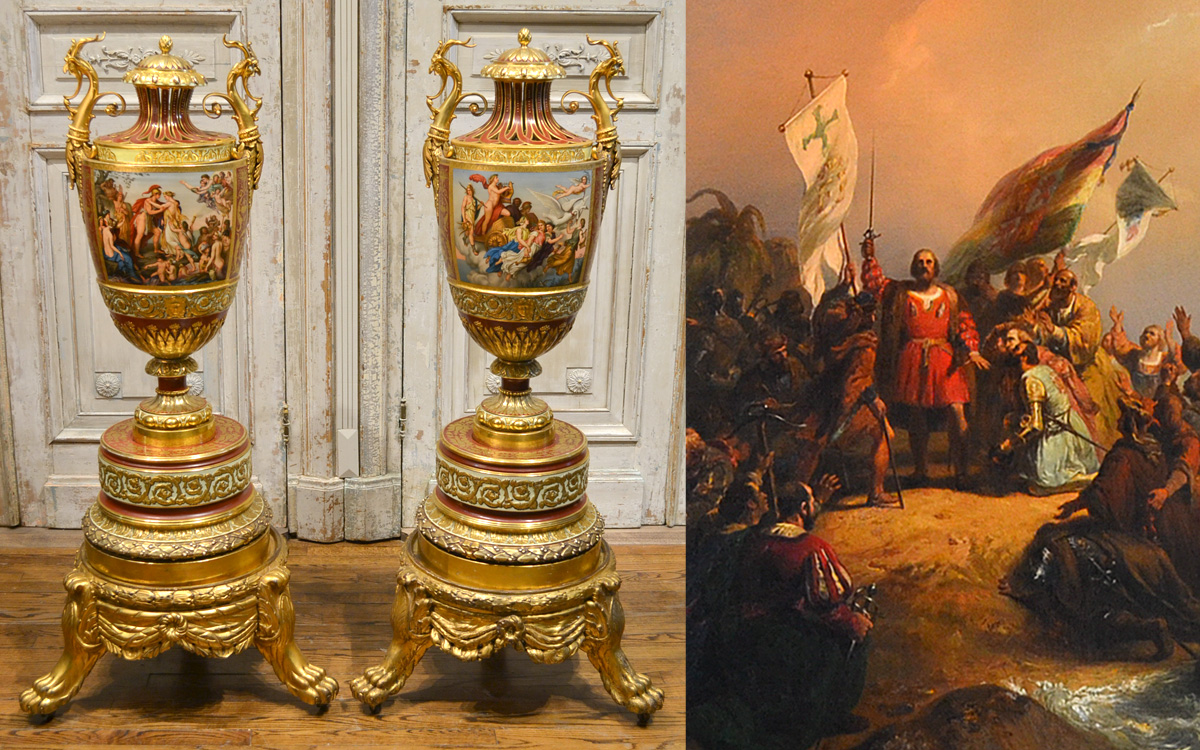 DALLAS, TX, UNITED STATES, November 11, 2019 — An outstanding pair of carved alabaster angels having gold-gilded wings and amazing overall detail sold for $28,800 and an important oil on canvas painting of Columbus’s discovery of America by Nicolaas Pieneman (Dutch, 1809-1860) brought $41,600 at an auction of items from the estate of Lonnie “Bo” Pilgrim (1928-2017), the co-founder of Pilgrim’s Pride.

Pilgrim’s Pride was, at one time, one of the largest chicken producers in the United States. Items from Mr. Pilgrim’s estate headlined the auction held November 2nd-4th by J. Garrett Auctioneers, online and in the Dallas gallery at 9203 Diplomacy Row. Also offered were items from Richard Horton of Fort Worth, Texas, who amassed a museum-quality collection spanning over 50 years.

“This sale was very reminiscent of the good old auction days,” said Julie Garrett VanDolen of J. Garrett Auctioneers. “We had the perfect storm of a big name, some fantastic merchandise and a phenomenal live crowd here on the floor. Many of our best customers and friends flew in to preview and bid. We’re thrilled for our consignors and for so many buyers who are taking home some important historical pieces.” Ms. VanDolen added the sale grossed more than $2 million.

The alabaster angels – 47 inches tall and shown bearing gifts and playing musical instruments – were the first item up for bid. “Nothing kicks off an auction like hands in the air and a bidding war on the very first lot of a sale,” Ms. VanDolen remarked. “These were estimated low, and a floor bidder wasn’t leaving without them. Understandable, as they will make for a killer holiday décor. That kind of bidding so early in the day set the pace and the overall tone for a great sale.”

The large, 19th century oil on canvas painting by Nicolaas Pieneman, titled Columbus Discovers America, was a stunning depiction, signed lower right, and measured 63 inches by 76 inches in the frame. It met and sailed past its high estimate of $30,000. “The painting is beautiful and was acquired by a prominent art gallery,” Ms. VanDolen said, adding, “It may end up in a museum.”

Following are additional highlights from the auction. A healthy in-person crowd made its way to the gallery in person over the course of the three days, while many others registered to bid online via the platform LiveAuctioneers.com. All prices quoted include a 28 percent buyer’s premium.

“It was actually an emotional moment when the hammer dropped and Dad was able to announce our phone bidder was Ms. Caldwell,” Ms. VanDolen said. “There was a special energy running through the crowd at that moment, followed by a round of applause and even a few happy tears.”

A pair of rare and monumental Royal Vienna urns, made circa 1880 and standing 57 inches tall (on footed stands), sold as one lot for $54,400. The capped urns, unsurpassed for quality, were surmounted by bronze antlered gargoyle handles and enriched with stylized gold decoration on a burgundy field. Each urn was painted in vibrant colors depicting Apollo and attendants heralding the dawn of Venus and Mars, and the reverse showing Justice and a muse emblematic of the arts.

An important and fine Louis XVI bedroom suite, crafted after the design of Jean-Henri Riesener (French, 1734-1806) for the commode of La Chambre de Louis XVI at Versailles, finished at $48,000. The suite consisted of a bedframe measuring 59 inches tall by 72 ¾ inches wide, a 9 foot 5 inch tall armoire signed “JRA” in verso behind a cobalt globe, and a pair of stands. The ormolu mounts were done by Jean Rabiant, with fruitwood marquetry and parquetry mahogany.

“Bo” Pilgrim co-founded Pilgrim’s Pride in 1946, when he opened a feed store in Pittsburg, Texas, outside of Dallas. He and his late wife Patty became dedicated antique collectors and traveled the world to furnish their residences with the finest antiques. Many of the items in the sale came from the couple’s mansion home in Pittsburg, nicknamed ‘Cluckingham Palace’.

J. Garrett Auctioneers, Ltd. is a full-service auction company with over fifty years’ combined auction experience in the antiques field. The firm specializes in estate auctions and works with private individuals, trust and estate attorneys and family executors to offer a comprehensive approach to all aspects concerning an auction. J. Garrett also purchases entire estates outright.

J. Garrett Auctioneers utilizes the latest internet technology to promote sales to a live and online worldwide audience of qualified buyers. The firm is always seeking quality consignments for future auctions. Interested parties can fill out a form online, or they can call 214-943-7801 for a free, no-obligation assessment; or, they can send an email to julie@jgarrettauctioneers.com.