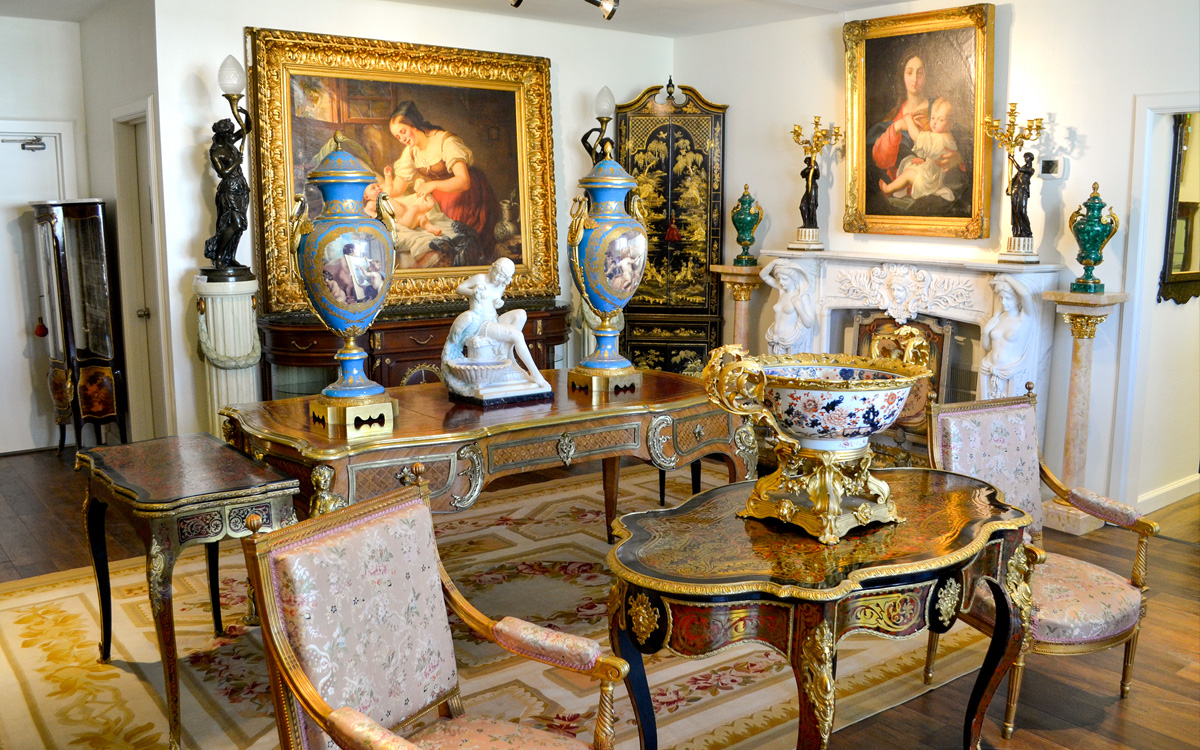 Originally from Antiques and the Arts Weekly – Review by Anne Kugielsky

DALLAS – J. Garrett Auctioneers presented an auction on April 27-29 featuring the corporate and personal collections of Sandra Clements, a renowned figure who dominated the Southern antiques and auction world for decades and who, at one time, was responsible for decorating numerous estates all along the gold coast of Florida with antiques and decorative arts.

Sandra Clements has been a well-known fixture in the antique, auction and interior design trades for more than 40 years. Daughter of the late, renowned antique dealer Charles W. Clements Sr, Sandra was instrumental in carrying on the Clements tradition of excellence since the mid-1980s.

Clements was also one of the first female auctioneers in the country – and she was “one of the best!” Julie Garrett VanDolen said. “She came to the block with a great sense of humor – she was funny and would run an auction fast. The crowd loved her, and she really knew her business.” VanDolen is one of the four Garrett family members who own and operate J. Garrett Auctioneers.

VanDolen said before the auction that she was going to watch “the marbles,” referring to the many marble sculptures of gods, goddesses and historic figures set to cross the block. It turns out that she was right when, on day two of the sale, a Carrara marble sculpture by Nineteenth Century Italian sculptor Biggi Fausto sold at almost double its high estimate, realizing $35,840. The 49-inch-high sculpture shows, with amazing detail, Pharaoh’s daughter holding the infant Moses in a blanketed basket. The circa 1885-90 statue from the Clements collection is signed verso Fausto, Biggi.

It was followed, price-wise, by the top lot on the first day of the auction, a Romanelli Italian figural marble group of Rebecca and Isaac, which sold at $28,800. Signed Raffaello Romanelli (1856-1928), the Nineteenth Century grouping was the subject of intense bidding and set the stage for all the subsequent marble lots.

“We had four strong inhouse bidders, which made for lively bidding and good participation,” Jeff Garrett, owner and auctioneer, said. “A Texas buyer was bidding inhouse against a London dealer on the phone for several of the marble sculptures, and other lots too – it was exciting to see,” Garrett said. “The Texas bidder won the Romanelli, the London bidder took the Art Deco marble [lot 679], for a good price.”

The Art Deco sculpture Garrett was talking about was by German-American artist Albert Weinert (1863-1947). The museum quality carved marble grouping included a young woman playing a lyre with two children at her side; dated 1924, the 78-by-40-inch signed sculpture realized $22,400.

From the Clements collection was a charming Pierce Francis Connelly (1841-1932) important white marble grouping of two Victorian women dressed in draped gowns and garland wreaths, signed on the socle, P.F. Connelly Fecit Flor 1866. The 34-by-21-by-30-inch sculpture came to the block with a $6/15,000 estimate but sold above estimate at $21,120; Connelly studied in Florence under Hiram Powers but gained full recognition in England and exhibited at the Philadelphia Centennial of 1876.

Rounding out the top marble lots was a striking, circa 1870, Carrara marble Continental statue of Eve standing next to a tree stump, holding a finely sculpted flowing fabric over the stump; in her other hand, she holds an intact apple at which she is gazing intently. The unsigned, 58-inch-high sculpture sold at $17,920 after competing bids both inhouse and online.

The Clements collection was certainly more than marble sculptures (many of which she inherited from her father, Charles W. Clements Sr), a French Kingwood grand piano in the Louis XV-style in excellent condition sold above estimate at $19,200. With gilt-bronze trim and animal claw sabots, the piano was by Erard, Paris, 1903.

A pair of antique French Sevres vases, with hand-painted cherubs shown painting in the center of the blue celeste field adorned with foliate motif gold overlay, was another featured lot. The pair sold within estimate for $13,440. The circa 1870 37-inch-high ovoid form vases were surmounted by fine dore bronze ring handles with laurel and berry wreaths and were of museum quality, according to catalog notes.

“While furniture is still not where it was,” Garrett said, “the Clements collection had some pieces of decorated furniture that did well.” For example, an antique French black marble-topped boulle credenza with tortoise shell and cut-brass inlays and bronze trim, sold at the top of its estimate for $10,240. “It was museum quality, like many items in the collection,” and the doors featured highly detailed symbolic images – one of a cherub with telescope and world globe, the other a cherub with scepter and books.

An antique French bronze console table, with a malachite top, sold at $11,500. The circa 1900, 32-by-71-by-32-inch table in the Louis XVI style had fine acanthus, rosette and laurel and berry gilt-bronze appliques across the frieze, which was center by a detailed caryatid mask. From the Clements collection, it sold below its high estimate.

Another lot of fine French furniture went above its $4/7,000 estimate to sell at $10,880. The circa 1860 French boulle writing desk, signed in the interior drawer, “Phillips Of Bristol,” was from Sandra’s fine and extensive boulle collection.

Rounding out the top lots was a silver-plated Christofle Malmaison flatware set, including 148 pieces that sold at $9,600, and a surprise lot. “I guess this could be described as a surprise,” Garrett said, “but I thought it had great potential.” Coming to the block with a $300-500 estimate, a Parisian street scene oil on panel was signed “P. Ribera,” artist Pedro de Ribera (1867-1949) and stamped verso “Art Gallery Gerard.” In a giltwood frame, strong bidding – mostly online – sent it to a final price of $6,400.

“Our business model is to offer two auctions a year on which we do a full showcase and include major collections. Our next auction will be in November and will include the estate of Bo Pilgrim,” Garrett said. Lonnie Alfred “Bo” Pilgrim (1928-2017) was the co-founder of Pilgrim’s Pride, which, at one time, was one of the largest chicken producer in the United States. His estate in Pittsburgh, Texas, is listed as more than $1 billion.

J. Garrett Auctioneers, Ltd. is a full-service auction company with over fifty years’ combined auction experience in the antiques field. The firm specializes in estate auctions and works with private individuals, trust and estate attorneys and family executors to offer a comprehensive approach to all aspects concerning an auction. J. Garrett also purchases entire estates outright.

J. Garrett Auctioneers utilizes the latest internet technology to promote sales to a live and online worldwide audience of qualified buyers. The firm is always seeking quality consignments for future auctions. Interested parties can fill out a form online, or they can call 214-943-7801 for a free, no-obligation assessment; or, they can send an email to julie@jgarrettauctioneers.com.